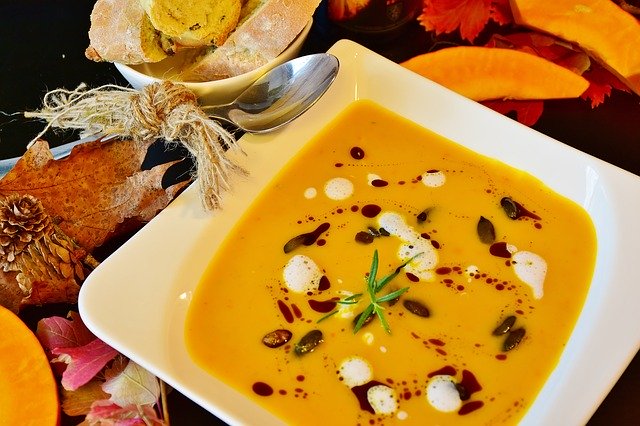 For this recipe for four people, you will need the following ingredients:

The pumpkin and potatoes are peeled and cut into pieces. In a large pot, it is cooked in enough water and the chicken broth. To this is added the chili pepper cut into small strips and the ginger diced into small cubes. In a pan, chopped pumpkin seeds are roasted without oil. The pumpkin is cooked after twelve minutes and can then be pureed while adding the cream. Salt is added to taste. The soup can be distributed on plates and is garnished with pumpkin seeds and a few drops of pumpkin seed oil. Enjoy your meal. After eating the spicy pumpkin soup, the stress is blown away.

Hygge – a living concept against stress

Develop a sense of humor

We use cookies on our website to give you the most relevant experience by remembering your preferences and repeat visits. By clicking “Accept”, you consent to the use of ALL the cookies.
Cookie settingsACCEPT
Manage consent

This website uses cookies to improve your experience while you navigate through the website. Out of these, the cookies that are categorized as necessary are stored on your browser as they are essential for the working of basic functionalities of the website. We also use third-party cookies that help us analyze and understand how you use this website. These cookies will be stored in your browser only with your consent. You also have the option to opt-out of these cookies. But opting out of some of these cookies may affect your browsing experience.
Necessary Always Enabled
Necessary cookies are absolutely essential for the website to function properly. This category only includes cookies that ensures basic functionalities and security features of the website. These cookies do not store any personal information.
Non-necessary
Any cookies that may not be particularly necessary for the website to function and is used specifically to collect user personal data via analytics, ads, other embedded contents are termed as non-necessary cookies. It is mandatory to procure user consent prior to running these cookies on your website.
SAVE & ACCEPT